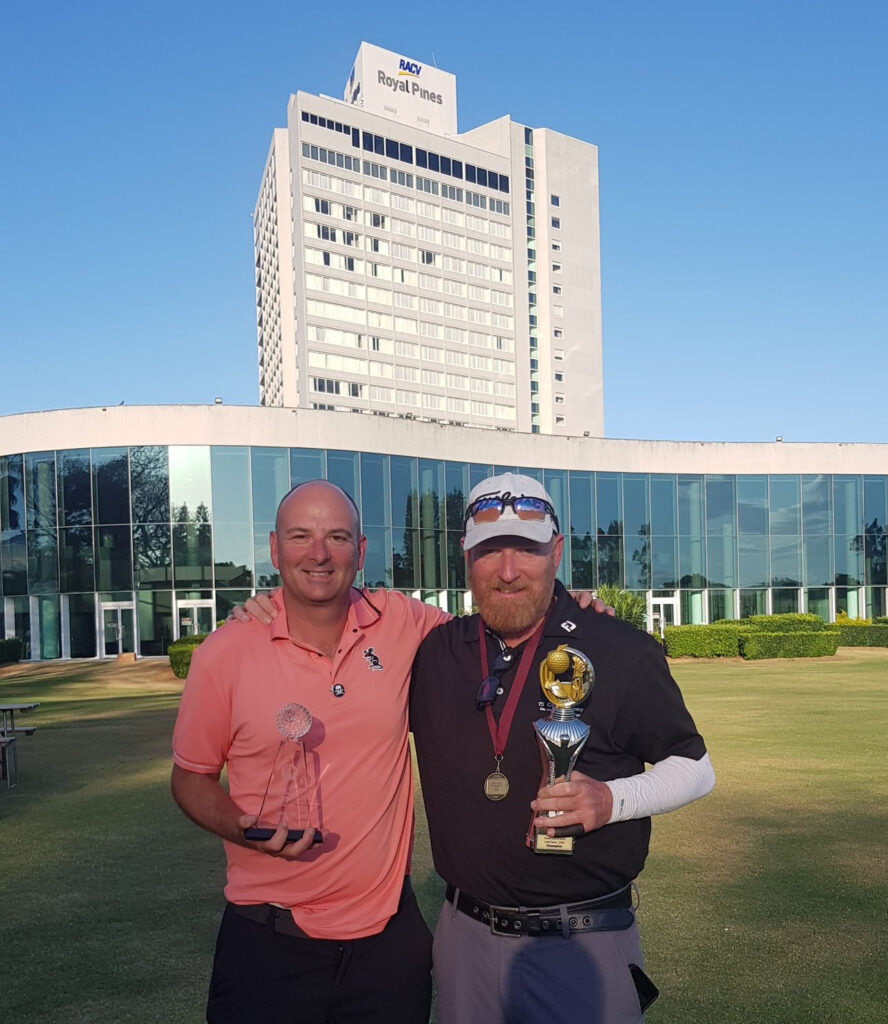 The 2020 Queensland Blind Golf Open has been won by Neil Herdegen, expertly assisted by his coach and caddy, Todd Sleep.

Todd Sleep is well known on the Gold Coast as the owner of TS Golf Academy and Driving Range at the Glades Golf Course. While Todd provided the sage advice of a good caddy when called upon, Neil gained an early lead over the first nine holes and withstood late challenges from Dr Brad Carver from Brisbane and Paul McKenzie from Canberra.

Todd’s ability to read the grained greens provided Neil with a strong advantage as he went on to add nine points over the final three holes in a near-perfect finish on the PGA course to secure the victory.

“The secret was remaining separated from the game” said Tallebudgera member, Neil Herdegen.

“Not knowing my score or the scores of my playing partners helped me remain focused on hitting the ball – it even makes the game somewhat enjoyable” he said.

The Queensland Open was played at RACV Royal Pines on October 12-13 2020. For the first time in Queensland Blind Golf’s history, this year’s Open was played on the championship “green”and “gold” courses. A stiff sea breeze on the final day added to the difficulty of the championship course and caused some of the bigger hitters to double-think their tee shots. Despite the wind, golfers enjoyed near-perfect conditions on both days.

Canberra golfer Paul McKenzie received the runner-up prize as well as long drive prizes for both days after an impressive display of big hitting. The B4 category was won by Steve Art. The B3 category was won by Dr Bard Carver with Jamie Hain getting the B3 runner-up award.  Steve Mitchel was victorious in the B2 category and in his first ever tournament, David Saxberg won the B1 category.

In what is believed to be a world’s first, this year’s Qld open featured an “Academy” category for junior and less-experienced players who want to experience playing in a golf tournament. This year, 13 year old Joshua Woods from Brisbane won the Academy Division with an impressive display in his first golf tournament.

If you have a visual impairment and would like to join please call us on 0424256462 or complete the application form.
If you’re interested in being a caddy, please get in touch.